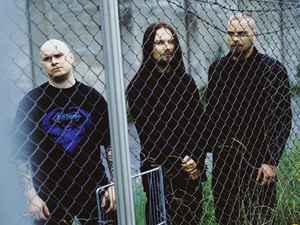 Profile:
Defleshed was formed in Sweden in 1991 by Lars L?fven (guitar), Kristoffer Griedl (guitar) and Oskar Karlsson (drums). A self-titled demo was made same year. In 1992 Gustaf Jorde (vocals, bass) from Crematorium joined the band and they then recorded the second demo "Abrah Kadavrah" which featured session vocalist Johan Hedlund. Italian Miscarriage Record released a 7" same year which contained three tracks from the demo.

In 1993 Gustaf became both bassist and vocalist and the band then recorded the promo "Body Art" which Invasion Records got a hold of and they then offered the band a MCD deal. "Ma Belle Scalpelle" was recorded in 1994 at Rolling Rock Studio and in 1995 Oskar Karlsson was replaced with Matte Modin. In 1996 their first full-length album "Abrah Kadavrah" was released and shortly after Kristoffer Griedl left the band.

In 1997 the band recorded "Under the Blade" in Berno Studio in Malm? and released it same year and in 1999 the album "Fast Forward" and the EP "Death...The High Cost f Living" were released and the band were signed to WAR Music. In 2003 "Royal Straight Flesh" was released through Regain Records.