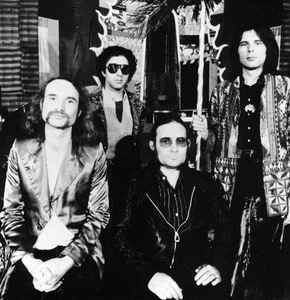 Profile:
German experimental rock band formed in Cologne circa 1968, initially as Inner Space and becoming "The Can" when fronted by American vocalist Malcolm Mooney. Can are well-known as one of the key pioneers of Krautrock, particularly during the era when fronted by Japanese singer Kenji "Damo" Suzuki who "turned their sound towards a crazy mixture of improvisation, noise, mantra and funk rhythms". They were constantly at the forefront of the Krautrock scene during their 10+ year history, composed music for films by directors including Roland Klick and Wim Wenders, and had an international hit with their pop satire single "I Want More" (1976).

The first Can member to go solo was Holger Czukay, and after Can split keyboard player Irmin Schmidt established a successful solo career. Other Can members also went solo and/or participated in other projects. In 1986 Czukay, Karoli, Mooney, Schmidt, and Liebezeit reformed, resulting in the album "Rite Time" (1989). In March 2003 Can received the German music industry's Echo Award for lifetime achievement.

Posthumously for some members, Can continue to inspire today and are blessed with a huge collection of tape recordings that have not seen the light of day. The Lost Tapes is part of this legacy, released in 2012, also known as Holger Czukay's pension fund. A new series is taking shape in the form of live recordings by long standing Can fans that shows the depth and wealth of the bands musical resolve.

January 21, 2020
CAN was and is in terms of music "pure anarchy". They did what they wanted to do, they sound like noone else, they are real "Punks".
Reply Notify me 6 Helpful

I have an LP of Can titled "Y(O)U". On the back is written "Rare tracks just for fans". Is it a bootleg? An unofficial release?
Cannot find any information about it.

April 5, 2018
Astounding that most music lovers seem unaware of Can. For me Can’s was the music I found when every other Western group seemed tired and unadventurous. I am unaware of any other group as avant garde as Can (yet still grooving the f*** out). The only warning I would offer for would be new listeners is that once you are under Can’s spell, no other music will come close to it! Although there is a rich mine of other Krautrock to discover too. Try the album, Hinten by Guru Guru or anything by Cluster.
Reply  See 1 reply Notify me 2 Helpful

It is one of popular culture's maxims that innovation and pioneering work is often copied ad nauseaum afterwards by a horde of imitators. However, very rarely someone or something creates a work or body of art that is so unique that it can't be followed. There are very few of these artists in music, and all are worth investigating.

To appreciate Can fully requires an understanding to a certain extent of their background. The "fatherless generation" of the sixties sought to reclaim a culture for Germany, one that whilst influenced no doubt by the emergence of AngloAmerican poprock, would be devoid of the past.

The influence of electronic godfather Stockhausen, is like Kraftwerk, apparent here, as both keyboardist Irmin Schmidt and bassist Holger Czukay had studied at length under him. With the addition of the incredibly metronomic Jaki Leibezeit and experimental guitarist Michael Karoli, their first efforts were influenced enormously by the Velvet Underground.

Again, parallels with Kraftwerk abound here, although it could be argued that Can had experienced their "golden age" of 1970 - 1975 by the time the former came to the fore. Both bands created their own workspace, in Can's example, Innerspace, an old castle near Cologne. With no record company interference or fees to consider, Can, under the guidance of both noted engineer Conny Plank and Czukay himself, recorded miles upon miles of studio recording, often jamming for up to 24 hours at a time. The freeform attitude, amplified by the fact that all were exemplary musicians, gave Can a flexibility that virtually no band could match.

From "Tago Mago" to "Soon over Babaluma" Can recorded 4 milestone LPs that have lost none of their impact over time. It could be argued that by this period Can were no longer a "rock" band, having more in common musically with funk and freeform avant-garde styles. By the mid-seventies, with Holger more interested in post-production, the momentum of the band waned and they ground to a halt in 1979, only to reappear, reformed in 1989 for one LP. The "Sacrilege" remixes in 1997 for me were an unfortunate footnote as most of them did little justice to a band who, now sadly with the death of Michael Karoli, we won't see again.

Can were utterly unique. Rather than drag influences from the past, they took inspiration from music across the globe, especially in later years. Their sonic explorations took them to places not touched by other bands or artists before or since.

November 30, 2003
Before the 4/4 beat was ever named that way and done by machines, there was a man already doing it by himself. His name was (and still is) Jaki Liebzeit. He was the drummer for this highly influential German band. His drum-playing style is unbeatable and no doubt influenced a lot of the music in forthcoming years.
But credit is also due to the entire group. Percussors of what is dubbed as krautrock, Can not only envisoned most of the sonic landscapes of a lot of electronic music, they also pioneered what we call post-rock by 25 years or so.
Also in their lineup is another accomplished and influential musician: Holger Czukay. His solo work and collaborations with people like Brian Eno, Bill Laswell and others still sound cutting-edge nowadays. Just like Can's music, for instance.
Reply Notify me 12 Helpful