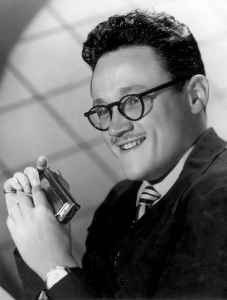 Real Name:
Jean-Baptiste Frédéric Isidor, Baron Thielemans
Profile:
Influential Belgian harmonica player, whistler and guitarist (29 April 1922, Brussels - 22 August 2016, Braine-l'Alleud). Considered the pre-eminent jazz harmonica player, he performed and recorded with some of the greats like Oscar Peterson, Ella Fitzgerald, Sarah Vaughan, Bill Evans, Fred Hersch, Dizzy Gillespie, Pat Metheny and Jaco Pastorius. He was also an in demand session player in pop music, appearing on records by the likes of Paul Simon and Billy Joel. Please use the real name profile Jean Thielemans for all credits containing the artist's real forename (or its initial) or only the surname (or misspellings thereof).

Thielemans began playing the accordion at an early age and taught himself how to play the guitar after being introduced to the music of Django Rheinhardt. After visiting the US in 1948, he was invited to accompany Benny Goodman on his European tour. In 1952 he emigrated to US and became a citizen in 1957. During this period he was mainly active as a member of the George Shearing Quintet. In 1955 he recorded his first album as a leader on the Columbia label. After the Quintet was disbanded, Thielemans returned to Europe, performing widely in Sweden and Germany. In 1969 he recorded an album with Brazilian singer Elis Regina, the start of a fascination with bossa nova that would eventually result in collaborations with the likes of Astrud Gilberto, Chico Buarque and Oscar Castro-Neves. After suffering a stroke in 1981 he had more difficulty playing the guitar and started concentrating even more on the harmonica.

His most famous composition is Bluesette, which has become a standard. With a larger audience he is perhaps best-known for performing the Sesame Street theme. He also appeared on numerous soundtracks, most notably The Pawnbroker (1964), Midnight Cowboy (1969), The Getaway (1972), Turks Fruit (1973) and Jean de Florette (1986). Many of those were scored by his long-term collaborator Quincy Jones.

Merzd?s number by lehapanin666
The Live Experience by cthulhu303
2016 - A Tribute To the Artists Who Have Passed This Year. by soulchap
Early jazz guitarists by mr_mando
View More Lists →